Break out the electric blanket, and put on an episode of Murder, She Wrote. Both are great winter weather comforts, but there’s nothing that complements them more than getting cozy with a bowl of this thick and chunky New England Clam Chowder.

Before we get into winter, let’s talk about summer, 1990 to be exact. I (Jonathan) took a family vacation to Newport, Rhode Island, where I was introduced to the New England chowder scene. On this trip we tried several chowders, but the one that stuck out the most had giant chunks of potatoes.

To clarify, these were potatoes cut SO big they eclipsed whatever else was in the cup. It was basically ALL potato, and quickly became a running inside joke anytime we ordered chowder on that trip and beyond. I later had a dream about going to a restaurant, ordering chowder and receiving a large unbaked, unpeeled Russet potato in a cup.

I digress, but I have to argue that potatoes are just as much a star of clam chowder as the clams. And having more of both isn’t a bad thing, as well as a healthy dose of bacon and onions. This makes for a very hearty meal.

How to make Thick and Chunky New England Clam Chowder

We have taken inspiration from two well known seafood restaurants to build this recipe. Our chunky New England clam chowder is a hybrid version of the east coast’s Legal Sea Foods chain and Seattle-based Ivar’s.

Legal Sea Foods’ chowder is well known because it has been served at every presidential inauguration since 1981. They have a reputation for super fresh seafood that meets high quality standards and even built one of the first quality control centers for fish processing.

This chowder is also sold at many retail locations in take home containers. When we taste tested this version, we were surprised because we didn’t think it had nearly enough clams. It seems by skimping on the main ingredient, they can offer it at much lower price than their restaurant version. We did like how it was nicely thick and creamy and is enhanced with Worcestershire and Tabasco sauce.

Ivar’s is a Seattle landmark restaurant and is known as much for its fish and chips as it is for its chowders. When we traveled to Seattle a few years back, we tried their New England-style clam chowder as part of their three chowder sampler, which also includes their smoked salmon and clamhattan chowders.

In their O-fish-al cookbook, Ivar’s shares their recipe, which we’ve heavily modified.

Fresh or canned clams, which to use?

We’re the northernmost of southerners, so while we have access to some great seafood from the Chesapeake Bay, we don’t exactly see a lot of fresh clams often in the store at good prices.

$21.79, not including the rest of the ingredients? We’re not trying to break the bank on this chowder, so we opted to go with canned clams.

We’re not saying don’t splurge, but for us the difference in taste is minimal for the price. Plus, you’ll save a lot of time you’d have spent cooking and removing the clam meat from the shell. You can get canned whole clams, but we decided chopped would save us even more time.

Chowder Power: Putting it all together

First you’re going to cook the bacon in a heavy bottomed pot or dutch oven.

When the bacon is crisp and browned, add the garlic and stir until fragrant about 30 seconds.

Add in in the onion and celery and continue to sweat the vegetables.

Keep cooking until the vegetables are soft and onions are lightly browned and translucent.

Next, you’ll pour in the reserved clam juice and potatoes. Then pour in enough water to just cover the potatoes.

Bring the pot to a boil and then lower to a simmer for 20 minutes, covered, to allow the potatoes to cook through. Remove from heat when the potatoes are fork tender.

How do you thicken New England clam chowder?

This is the fun part. In addition to making this chowder extra chunky, this chowder is thickened twice, once with flour and butter in a roux and then at the end with cornstarch mixed with a tablespoon of water to finish.

In a separate saucepan, melt the butter over medium heat and whisk in the flour. Keep stirring for about 3 minutes until it’s lightly golden.

Slowly pour in the half & half (warm it before pouring to prevent clumping) while constantly stirring until thickened. You now have a cream base.

Use a rubber spatula to move the cream base into the pot with the vegetables and whisk to combine.

For even more thickness, we recommend stirring in a cornstarch slurry (1 tbsp cornstarch mixed with 1 tbsp water), but this is totally up to you.

Now you’re ready to serve. Optionally you can garnish each bowl with some more chopped bacon bits and chopped parsley.

And don’t forget the oyster crackers!

Want more seafood recipes to go with this chunky clam chowder? Try these:

Craving potatoes? Then try these recipes: 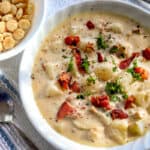 This thick and chunky New England Clam Chowder is a hearty meal that is perfect for a cold winter day.

*To avoid clumping, stir up the cornstarch slurry immediately before pouring it into the chowder.