When you think of home fries, what comes to mind? The scattered mass of browned potatoes playing sidekick to your French toast at your local greasy spoon? The value-added carbs to your diner short stack of pancakes? Whatever you may think, this ubiquitous staple is almost always a morning meal background player, until now. These Indian-spiced breakfast potatoes won’t only outshine a side of scrapple, but just might be able to get equal billing with the big guns of breakfast. We’re looking at you, Curried Italian Sausage Frittata.

What exactly are Indian-spiced breakfast potatoes?

Firstly, these are home fries at their core, which are simply par-boiled potatoes that are fried and browned in oil and seasoned with salt and pepper. Good home fries have some crispiness all over.

A variant of home fries is Potatoes O’Brien, which adds in onions, garlic and peppers that are sautéed with the potatoes.

These Indian-spiced breakfast potatoes combine the two aforementioned methods with some of the flavors of Bombay Aloo. It is an Indian potato dish that uses garam masala, turmeric, mustard seeds and chili powder.

What makes these Indian-spiced breakfast potatoes pop in your mouth?

Garam Masala is an Indian spice blend, and there’s no single recipe because it varies by region.

Some of the most common blends you’ll find in the store contain:

We wanted a more pronounced cumin flavor so we opted to add more of it into the base garam masala mix as well as cayenne pepper for some heat.

What’s different about our recipe is that we’ve packed in the exotic flavors of Bombay Aloo with fewer ingredients while keeping the characteristic crispy texture of the home fries.

Infuse the potatoes in the spices through boiling

Partially boiling the potatoes in some of the spices will give them a nice yellow tinge and infuse some of the flavor prior to frying.

The key to making crispy home fries is starch retrogradation

Chilling the potatoes the night before

You can chill for less time, but the gel won’t form as cohesively and you’re going to get mushier hash like potatoes from steam. It still tastes good but the texture isn’t crispy. 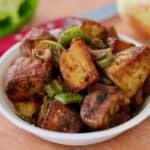 Our Indian-spiced breakfast potatoes are seasoned with garam masala, cumin and cayenne for a spicy take on the usual home fries.

*If you want a little less heat, adjust the cayenne to your taste!

*Inactive time: It takes about 8 hours to chill potatoes and gelatinize after par-boiling.  If you don’t have time to chill them the night before, you can still cook them.  The texture will be softer, but they will still taste good.