Just when you thought you’d gotten over your french fry addiction, in walks smokey maple bacon poutine. If you haven’t had this stick to your ribs meal yet, you’re missing out. It’s time to put some poutine into your routine.

For those of you who live in Canada, you’re well aware Wendy’s locations there offer bacon poutine. You’re lucky and you know it!

However, we’re taking it a step further by adding even more smokey flavor into the gravy. Plus, we’re balancing it out with some sweet bacon action.

Poutine in general is not complicated to make at all, but we’re going to discuss a bit about its history and what makes a great poutine.

A BRIEF HISTORY OF POUTINE

In its most basic form, poutine is a savory dish of crispy french fries and cheddar cheese curds, covered with a brown, mostly beef-based gravy.

What really differentiates one poutine from another is the toppings. The possibilities are endless as to how you can spin these ingredients, and many variations exist from simple (like our smokey maple bacon poutine) to complex (e.g. fois gras poutine).

Where was poutine invented?

Let’s first clear up a common misconception. Poutine is widely known as a Canadian dish, but more specifically it’s a French-Canadian dish. It’s a symbol of Québécois culture, not Canada as a whole.

Where the name poutine originated

Poutine, pronounced poo-TIN in Quebec and poo-TEEN everywhere else, is a hybrid name. It’s said it comes from “Ti-Pout”, a nickname for a cook who worked at Le Roy Jucep (one of the first poutineries) and a slang word for “pudding”.

But it’s also attributed to a Québécois slang term for “mess”, since the addition of curds and gravy to french fries is quite messy.

By the way, this is a bit of Déjà vu moment for us. This is not the first mess recipe we’ve encountered.

Several restaurants in the Centre-du-Québec region claim to have invented poutine in the late 1950s-early 60s. These include the still operating Le Roy Jucep and Le Lutin Qui Rit, which is no longer in business.

Poutine was once mocked by the rest of Canada, but has more recently spread in popularity amongst its provinces, the northern United States and beyond.

It was introduced to a wider audience in the 70s at La Banquise in Montreal. It eventually debuted at local Burger King franchises. The use of inferior cheese at some poutine vendors was off-putting and led to a decline in popularity.

Some Canadians express ambivalence toward the dish and its connotations. It has been suggested that poutine’s humble beginnings in rural snack bars, truck stops, and food trucks, and its use of cheese curds—which are often considered a typically small-town indulgence—make it indicative of working-class culture.

Beginning in the 90s, chefs like David McMillan of Montreal’s Joe Beef began to expand the basic poutine concept from a roadside staple to something more exciting. In 2001 chef Martin Picard of Au Pied Cochon in Montreal debuted his poutine with fois gras.

Fusing high-end ingredients with this seemingly unsophisticated Quebec staple elevated poutine’s status among the foodie elite and has since been copied by chefs across Canada.

Now there are gourmet exotic poutines that include ingredients like lobster or caviar paired with artisanal cheeses and National Poutine Day is celebrated on April 11th in Canada.

Can I get poutine in the US?

Poutine has gained some traction in the northern US, but especially in some New England restaurants, where it’s only a short drive over the border to Quebec.

Additionally, poutine is associated with the US creation of disco fries from New Jersey. Made with fresh or shredded mozzarella, instead of cheese curds, disco fries are known for being a late-night drunk food. Will they have a renaissance the same way poutine did? We’re not sure.

But the good news is you don’t need to live up north to enjoy this cold weather comfort food. We’ve come up with an awesome bacon poutine recipe you can easily make at home.

We wanted a poutine recipe that was relatively easy to put together any day of the week so we’re taking a few short cuts. The only real work involved is making the gravy and cooking your fries.

We’ve simplified this by using store-bought stock and frozen french fries. However, if you have the time to hand cut some fries and make your own stock ahead, you definitely won’t be disappointed.

We’re going to balance out the savory and salty aspects of this dish with a little sweetness by first preparing some maple brown sugar bacon. About 9-12 strips will do nicely.

Here we used center thick-cut bacon, which left plenty of surface area to slather on brown sugar, maple syrup and pepper before going into the oven.

Making Poutine Gravy: Why it’s so good with bacon

What ingredients are used in our poutine gravy?

What are cheese curds?

Where to buy cheese curds for smokey maple bacon poutine?

In the US, many Target stores with a grocery section sell them, but they’re typically not the fresh squeaky kind.

These work great, and we found that cutting these up and leaving out for 15 minutes at room temperature helped it to melt when the gravy is poured over.

Outside of Quebec, Wisconsin is the premier purveyor of cheese curds. For fresh cheese curds that squeak you’ll have to mail order them overnight delivery if you don’t live near any big cheese production areas. Here are some options we found:

What to use if you can’t find cheese curds

Because it melts well, fresh mozzarella is a good substitute. In fact, many poutineries will use a mix of cheese curds and mozzarella to have an optimal blend of partially melted and fully melted cheese.

The best french fries for poutine

It doesn’t get much better than hand-cut Russet potatoes, deep fried in beef tallow (if you can find it) or peanut oil. For poutine, deep frying the fries gives them the crispiness to hold up to all the wet gravy and cheese.

But don’t fret if you don’t have the time, a deep fryer, or the knife skills, yet. Store bought frozen french fries are still mighty tasty and you can prepare them in your oven or an air fryer.

For this recipe we used Ore-Ida Golden French Fries. We’re sure Arby’s or Checker’s seasoned fries would work great too. 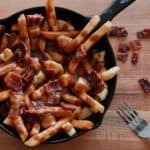 Our smokey maple bacon poutine has everything: cheese, gravy, french fries and of course bacon! What more could you ask for in a poutine?

For the brown sugar maple bacon:

* Start frying or baking the french fries according to package directions when you start the gravy so that both are ready around the same time.  1 lbs. takes about 6-8 minutes in a deep fryer or 10-15 minutes in the oven from frozen.