Chocolate and peanut butter is one of the ultimate dessert flavor combinations. In this recipe, we’re giving you more of the good stuff. These easy to make peanut butter swirl brownies have been triple fudged inside and amply PB’d on top.

When you’re ready to take your brownies beyond the box mix, this is definitely the way to go!

How to make peanut butter swirl brownies from scratch?

If this is your first foray into making homemade brownies we assure you there’s nothing to it. Plus, we’ll show you how to swirl the peanut butter on top to make them look and taste even more exciting.

How to make brownies fudgy and chewy, not cakey?

For a truly fudgy brownie, this recipe uses a combination of bittersweet and unsweetened chocolate, plus chocolate chips. We recommend Ghirardelli. While cocoa powder-based brownies do have their advantages, including being more cake-like, the cocoa butter in chocolate gives brownies a firm, fudgearific texture.

The chocolate is also sweeter than cocoa powder, which works out great because you won’t have to add any sugar to the peanut butter that will adorn every delicious brownie square.

The other key to getting fudgy brownies is to underbake them slightly. We’ll discuss that more further down in the post.

This is probably the hardest part about making the batter, but yet it’s so easy. All you have to do is:

Some notes about mixing it all together

Now it’s time to combine the melted chocolate mixture with the other ingredients.

How do you swirl the peanut butter on top of brownies?

Here’s the really fun part, the part we’ve all been waiting for – swirling the peanut butter! You’re going to microwave about a half cup of peanut butter for 30 seconds and stir it. This makes it soft, creamy and spreadable. Really, that’s as uncomplicated as it gets.

Then, using a spoon or spatula, scoop globs out into rows. It doesn’t have to be neat or perfect at all. Just get it all over the top.

Now all you have to do is take a butter knife and drag it through the gobs of peanut butter. Drag the knife from top to bottom, then turn the pan 90 degrees and repeat. You can do this as many times as you desire, just don’t make yourself dizzy with all the swirling around.

How to know when the brownies are done?

As stated above, the brownies turn out the best when they’re slightly underbaked. In our oven, the brownies finished at around 25 minutes, but your bake time may be different. The best way to tell when they’re done is to insert a toothpick at around the 25 minute mark (when the top has baked and looks dry). Unlike when you’re checking a cake for doneness, the toothpick should not come out completely clean. It’s okay if there are some fudgy crumbs. If your brownie batter is still jiggling when you shake it, it’s not done.

How to cut brownies cleanly?

So now you’ve done all the hard work and you’re ready to devour the brownies, one by one, except…you need to cut them first. And if you’re not used to this, you may not know that there are a few ways to achieve neatly cut brownies and avoid having a pile of crumbs. While brownies that fall apart are still delicious, they’re much harder to eat.

Cooling the brownies to room temperature makes the chocolate set and solidify. Cutting into warm brownies will pull them apart, so be patient and don’t skip this step. To speed this up, move the baking pan onto a cooling rack.

3 ways to get neatly cut brownies.

Wipe the knife after each slice.

No matter which of the three methods you use, wipe the knife off after each slice. Any residual brownie stuck on the knife will pull the brownie apart.

Lastly, you want to make a nice smooth motion going from one end of the pan to the next. If you saw the knife back and forth, it will begin to break up the brownies.

Now that you’ve nicely sliced them, you can break out a tall glass of milk and celebrate – Cheers! 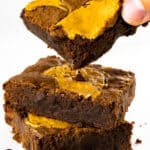 Chocolate and peanut butter is one of the ultimate dessert flavor combinations. In this recipe, we’re giving you more of the good stuff. These easy to make peanut butter swirl brownies have been triple fudged inside and amply PB’d on top.

Use creamy peanut butter.  You can start with a small amount (1/3 cup) and if needed, add more peanut butter.  We used 1/2 cup, but you can use more or less to your taste.

**These brownies turn out great when they’re slightly underbaked.  Check it around the 25 minute mark with a toothpick.