We love The Swedish Chef, but he has nothing on these Swedish meatballs and noodles. Those are extra wide egg noodles by the way, with sliced baby bella mushrooms for the win.

While your first thoughts on the subject may drift to IKEA, this is far easier to assemble than their MALM bed, and no allen wrench is required. And for us, it’s a two-hour drive to get to their cafeteria. No thank you.

But what about Boston Market’s microwaveable frozen version? It is way more convenient, but as of this writing it doesn’t even seem to be featured on their website anymore. Always thought it was weird to offer something as a frozen home version that wasn’t sold in the restaurants, but that’s a discussion for another post. Anyway, the best part of that was the noodles by far.

Maybe one day we’ll have to visit the IKEA in Boston to see if those are superior meatballs. On second thought, we’re putting that on our list of crazy things we’ll never get around to trying.

In the meantime, we’ve hybrided the two ideas to make a rendition of the furniture store’s flagship meatball that feels right at home in a stroganoff-esque sauce resting on a bed of sleep inducing yellow noodles.

The best of both meatballs: frankensteining some recipes

Back when the pandemic started, IKEA released their recipe for meatballs and gravy, and surprise surprise, the secret sauce ingredients were soy sauce and dijon mustard. Never would have guessed that. But it makes sense since these two ingredients are complex enough to do a lot of the heavy lifting.

Whether it’s the actual recipe found in their stores or not, this is pretty darn good. But can we make it better? We sure did!

Here’s what we changed with our Swedish meatballs and noodles

We wanted to do a little something extra with the meatballs, so we added more garlic, because you’re not really tasting it with 1 clove. Plus, it’s good for you and bad for vampires. And we opted for about half as much onion to give that garlic a fighting chance against said vampires.

Then we added in a smidge of ground allspice. This gives it a distinct flavor-popping aroma. If it works for Jamaican jerk chicken and Cincinnati chili, it works here. Many mistake allspice for being a spice blend, but it is actually a dried berry.

Coincidentally, allspice has some similar flavor notes as other spices. So if you can’t find ground allspice, you can blend together cinnamon, cloves and nutmeg. For this little amount you probably won’t notice a huge difference.

We also went for a 1:1 ratio of ground beef chuck to ground pork. Instead of using milk, which is typically used in meatballs to make a panade, we subbed out for more beef stock and water. Then we added in an extra egg to help bind it all together, and this made for a slightly lighter, yet still tender meatball.

As for the sauce, we just made some minor tweaks including using heavy whipping cream instead of European double cream. We also subbed out the vegetable stock for all beef stock. Why buy two stocks if you already have one open?

The process for making these is very similar to our Spicy Mediterranean Meatballs. You can check out the step-by-step process on that page.

The only difference is:

We used a food processor to blend it all together, mainly because it helps give the meatballs a smooth outside texture and blends all the ingredients thoroughly. It helps develop the interlinking protein network of myosin, which is what makes the meatballs chewy and smooth on the inside. But if you prefer to do it all by hand, you can.

Can Swedish meatballs be baked?

Yes, in fact we love cooking them this way. We baked them in the oven vs. in the pan because the meatballs cook at an even rate at 350° F.

The only downside to this method is that they develop a ring of liquified proteins, which is commonly mistaken for fat. This is easily remedied by taking a paper towel and wiping off the meatballs once they are cool enough to handle.

Can Swedish meatballs be frozen?

Again, yes! Because they’ll be cooking at the same rate in the oven, this works great if you want to bake a batch and freeze them for later. Then all you have to do is thaw and finish in a cast-iron pan by browning the meatballs for a few minutes.

If you’ve made our Smokey Maple Bacon Poutine recipe, you know just how easy making a beef-based gravy can be.

Simply melt some butter, stir in the flour for a few minutes until it becomes a light golden brown and then slowly whisk in your broth. Then, you’ll add your spices and cream of your choice (see below for different options) and keep stirring until it’s thickened.

How to make the gravy creamy? : 3 different ways

This is kind of a choose your own adventure. There are a few ways to get your gravy nice and creamy and it’s totally up to your personal tastes.

We really like extra-wide egg noodles because the meatballs seem to nestle themselves into them well. However, you can sub in just about any dry noodle pasta that you want.

This is by far the easiest part. Simply fill a large pot or dutch oven with water, add salt and bring to a boil. Once boiling, cook the noodles to the manufacturer’s directions, then drain and serve. That’s all there is to it.

The only secret we have to offer is to make sure your noodles are done boiling when your gravy is done. So allow plenty of time to get your water up to a boil. Then, when you add your noodles, start your gravy and you should finish about the same time.

What do Swedish meatballs and noodles go with?

Swedish meatballs are traditionally served with lingonberries as a side item. But we didn’t have any and instead used raspberry jam, the very same jam used in our Rosemary Raspberry Shortbread Thumbprint Cookies. It gives an otherwise brown dish some much needed color and sweetness. We also garnished with some chopped parsley.

If noodles aren’t your thing and mashed potatoes are what you desire, go for it! That is gravy’s best friend after all. 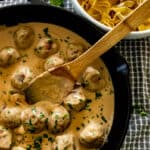 These meatballs are the ultimate comfort food.  We top them with a rich, creamy gravy and serve them over extra wide egg noodles with a spoonful of our favorite jam.  Save yourself a trip to your favorite Swedish furniture store, and make these at home!

For the gravy sauce and noodles

*This recipe can be made without a food processor, but we recommend using one in order to get a smoother texture.