As far as we can tell, the Sailor sandwich may very well be Richmond, Virginia’s most well-known food item. You can find it on numerous restaurant menus in the area but not too many places outside of Central Virginia.

The origin of the Sailor is an enigma. It is unofficially said to have been concocted during WWII at the New York Deli in the Carytown shopping district, perhaps as a blue plate special that just stuck around. According to local lore, Naval seamen in the V-12 Training Program at the University of Richmond would frequent the restaurant, ordering the mystery sandwich to such a degree it became synonymous with them.

We were inspired to recreate this at home because we think the Sailor deserves far wider recognition.

What exactly is a Sailor sandwich ?

The traditional Sailor Sandwich is comprised of:

Interestingly, the knockwurst bears a vague resemblance to a submarine, navigating through a sea of pastrami and swiss. Whether its creator intended this is up for debate.

Where to get a Sailor Sandwich if you’re visiting RVA (That’s local shorthand for Richmond, VA)

How NOT to sink your Sailor

Start by buttering two slices of the rye bread on one side. We used seedless here, but it tastes great with the caraway seed kind too. Flip one slice over and set aside.

Next, split the knockwurst in half, but don’t cut all the way though so that it folds open like a book. It’s going to lay flat on the sandwich so it doesn’t roll off.

Set the griddle over medium heat and grill the flat side of the knockwurst until browned. Flip and grill the other side until the casing blisters slightly. Set aside on a plate.

Then, place the pile of pastrami on the griddle over medium-high heat and grill first side for about a minute. It’s okay if gets slightly browned.

Flip the pastrami over and place two slices of the cheese on top. Cover with another frying pan, a heat proof bowl or tent with foil for about a minute. The trapped moisture will steam melt the cheese.

Once melted, slide the flipper under the pile and lift onto the slice of bread with its non-buttered side up.

Lay the grilled knockwurst flat side up onto cheese. Squeeze the desired amount of mustard on the knockwurst and place the other bread slice, with its buttered side up, on top.

Reduce heat back to medium and lift the assembled sandwich onto the griddle and toast until both sides of bread are golden brown, 1-2 minutes per side.

Slice the sandwich in half and serve with kettle potato chips, fries or potato salad. If you have it available, we also recommend a can of Dr. Brown’s soda. 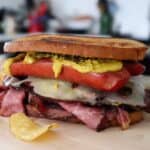 This sandwich is a Richmond, VA favorite, piled high with pastrami, knockwurst and Swiss cheese on rye bread.

*We recommend using a pan or a griddle with a low rim to make it easier to flip the sandwich.

Also, check out our guide to Richmond, Virginia Food Trucks