When you feel like having breakfast for dessert, or the other way around, you’re in for a treat with our Spiced Maple Pecan Waffles.

But that’s not all. These made from scratch waffles are topped with a luxuriously sweet, and easy to make, Cinnamon Crème Anglaise sauce.

Pecan Waffles in the pandemic

This year, for the first time in Waffle House history, the venerable chain temporarily closed 365 of their restaurant locations, and patrons weren’t able to get their pecan waffle fix. They’re well known for their pecan waffles as well as staying open during emergencies as measured by the Waffle House Index.

Even IHOP is closing over 100 stores permanently due to the pandemic. If you can’t depend on these places staying open, what is one to do?

We’ve taken the typical pecans and spiced them up with maple syrup, cayenne and black pepper. In fact, they’re the same ones used in our Texas Whiskey Cake, and they work great here too.

Coincidentally, when we made the cream sauce for the Whiskey Cake, we inadvertently made a crème anglaise sauce. We just didn’t know it at the time.

What is crème anglaise?

For this recipe, we’ve simply added a cinnamon stick and a bit of Saigon cinnamon.

How is crème anglaise different from a custard?

You may be thinking that this sounds very similar to making a custard, such as when you make an ice cream base.

The difference is that crème anglaise is meant to be poured, while custard is typically thickened with a starch (such as cornstarch). A custard could be used as a pastry filling (Crème pâtissière) or as a base for ice cream.

How to make Cinnamon Crème Anglaise

The mainstream way of making the sauce is somewhat complicated and involves tempering the eggs, without scrambling them, into the heated milk.

We’ve got a much simpler way that involves heating all the ingredients at the same time. The key is not exceeding the cooking temperature of 180 degrees Fahrenheit or you will get curdled scrambled eggs. You can, however, remedy this problem by straining the sauce.

The process is quite easy:

What do you put on your waffles?

The go-to condiment is almost always maple syrup. But waffles have all the hallmarks of dessert, so why not try something new and pair them with a dessert sauce?

A few years ago, we graduated from a standard square 2-waffle Westinghouse iron to a Cuisinart double waffle iron. While not absolutely necessary to enjoy great waffles, pecan or otherwise, it’s well worth the investment if you do this regularly.

The Cuisinart model is a beast and is just like the kind you’d find at a hotel breakfast buffet, but made specifically for the home cook.

The first waffle is the worst waffle

To maintain the integrity of your waffle maker’s non-stick coating it’s always best to hit it with some non-stick spray before you start. Don’t skip this step.

However, we only do this for the first set of waffles on each batch.

Why? As is often the case with pancakes, the first waffles to come off the iron are a little less than ideal. These slightly irregular first attempts are however a great way to test your doneness setting.

We’ve found that the spray can inhibit even browning. There’s melted butter in the waffle batter, which is more than enough to coat and season your iron and give you nice browning for the rest of your batch.

We hope you’ve enjoyed this recipe. As always, comments are welcome and encouraged!

Check out our other flavored waffle recipes: 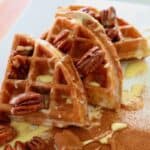 These fluffy waffles are filled with maple-glazed pecans spiced with black pepper, cayenne and of course, maple syrup. Then finished with a decadent cinnamon créme anglaise.

For the Spiced Maple Pecans

For the Cinnamon Créme Anglaise

For the Maple Pecan Waffles